Jean Prouvé always said to never copy—to go ahead and do something different. According to his grandson and architect Serge Drouin, that’s why, after dropping out of school at the age of 14, the future French design icon apprenticed with a Parisian metalsmith, seeking to master one of the few materials unfamiliar to his father, who was an Art Nouveau painter and sculptor. It led to Prouvé’s mastery of steel and aluminum, and eventually a string of prefab housing prototypes that were generations ahead of his contemporaries. Even today, according to Drouin, when engineers dismount Prouvé’s buildings, they can’t always figure out the bracing and support system that he intuitively set up within the structures he created.

As the designer developed his craft, and later his own business, Atelier Prouvé, he became adept at fabricating, fashioning, and bending steel at scale, eventually graduating from smaller scale structures such as elevator cabs and furniture into prefabricated housing, beginning with the BLPS model (Beaudouin, Lods, Prouvé, Forges de Strasbourg) in the late ‘30s, a futuristic steel vacation home for French works. His homes were uniquely positioned to help cope with the post-war housing shortage of the ‘40s.

Prouvé’s attractive gas station, with its clear glass facade, demonstrates a key aspect of his work—the idea that furniture and architecture require the same thinking process. The joints of this polygonal structure recall something you may see in his furniture designs. 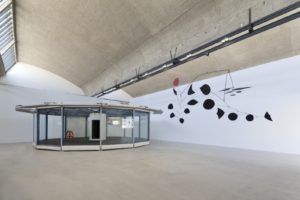 Take A 3D Tour of A Modular Design…See The Quality!

We Are Proud Members of the Modular Building Institute